Real quick, gigX was banned in 2017 for making real life threats against the Judge after he betrayed him and Circle-of-Two.  Check out this link if you want to know more. 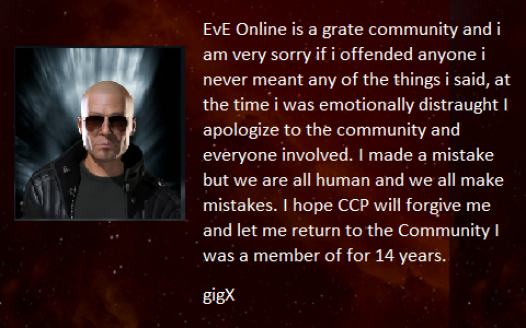 Recently gigX created a petition asking for CCP to commute his permanent ban -which I have mixed feelings about.  On one hand;

On the other hand;

For those that don’t know, you should never use “if’s” or “but’s” in your apologies.   “But’s” negate everything that came before them, and “if’s” deny the harm.  For example, “I’m sorry if I hurt you, but you were being a bitch,” translates to, “you were being a bitch.”  Don’t believe me? Go ahead and try it on your gf or wife next chance you get.  Also, if you’re feeling particularly adventurous, try to squeeze in a, “damn, did you run out of Midol or something?”

Anyway, gigX not only qualified his apology with an “if”, but he also “apologized” for offending people.  The problem with that was that he wasn’t banned for being offensive; he was banned for making real life threats to The Judge and breaking the Eula.   Thus, it looks like he’s actually more concerned with re-framing the narrative than offering a sincere apology -and this is important because it indicates that he hasn’t changed.

Sigh.  I wish I could endorse lifting his ban.   He was a significant content creator, and we could use some of that right now.  Unfortunately, he hasn’t given me a reason to believe that he’s actually sorry or deserving of a second chance.